Is a Vegan Diet Healthy for people with T1D? 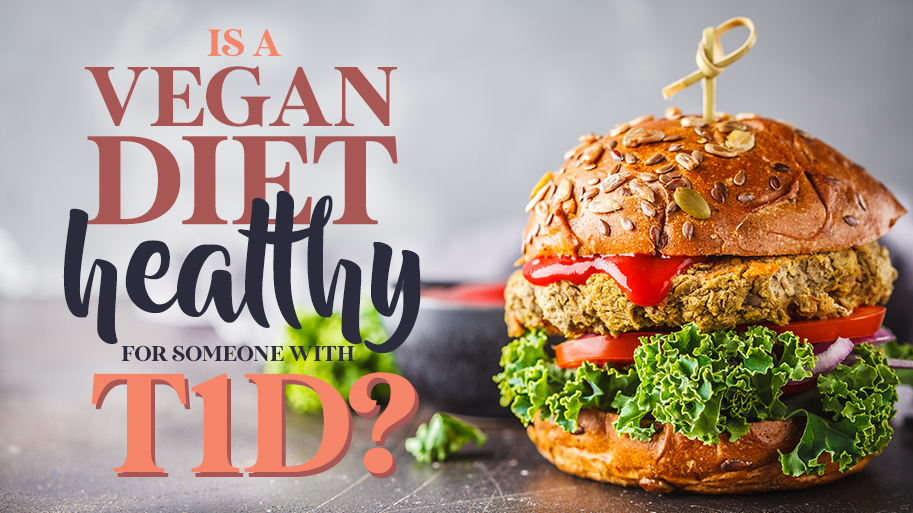 Never before have we had such a cancel culture when it comes to nutrition. Everyone claims to have found the perfect diet and set of protocols for health & well being. Their diet becomes a religion and anyone who doesn’t follow it is shunned. Eliminating entire food groups & entire macros (like fat, carbs, or protein) is commonplace. With all the shade being thrown from one diet community to the next you’d think our diets would all be drastically different, but they’re not. Katie Wells from Wellness Mama says it best,

Most diets out there believe in these major principals:

If you’re wondering, is a vegan diet healthy for people with T1D? I think we need to consider the following…

Nutrition is Not One-Size-Fits-All (or Even Most)

Studies Can Prove Any Outcome

Not all studies are well researched and not all have good & true intentions (but that’s a discussion for another time). It’s important to look at the details of a study to determine its validity.

For example, a big study that’s pointed to in the vegetarian & vegan community is the China Study. It’s conclusion… eating meat is deadly. While I don’t plan on making this post a critique of the China Study I will touch one major flaw.

The author of the China Study didn’t take into account the quality of meat these people were eating. We know the meat of conventionally raised cattle in factory farms being injected with hormones, antibiotics, vaccines, and fed corn (which is often rotten & moldy) is FAR different than the meat of a pasture raised cows who are humanely cared for. To dial it in even further, meat production in China in the 1980’s (the time of the China Study) was far from desirable.

The quality of your food matters. Big time.

So is is a vegan diet healthy for people with T1D? Let’s look at its nutritional weak spots in regards specifically to type 1 diabetes.

Concerns for T1D’s on a Vegan Diet

In full transparency, I eat meat. I believe that animal products are extremely nutrient dense, especially when raised humanely.

That being said, I am not here to push my way of eating on anyone. I think everyone’s dietary needs are different and I don’t think any diet is perfect for all people. That being said, I am willing to shine a light on areas where certain diets lack and certain nutrients are near impossible to get.

This fat-soluble vitamin is incredibly important for people with type one diabetes. Vitamin A deficiency has been linked to both the development of autoimmune disease and the worsening of existing ones. Specifically type 1 diabetes, rheumatoid arthritis, and lupus [1]. It is essential for healthy vision, helps to calm inflammation, and balances the immune system[2].

True vitamin A (retinol) is only found in animal sources. The body is able to convert beta-carotene (plant sources) into vitamin A but an astronomical amount is lost in the conversion, 12:1 in most cases [3].

The best sources of Vitamin A (retinol) are egg yolks and liver (including cod liver oil). Since I can’t stomach liver, I rotate between taking desiccated liver capsules and liquid vitamin A drops.

The list of benefits of vitamin D for people with an autoimmune disease is a long one. Not only can a deficiency in Vitamin D cause autoimmune diseases to worsen, but it can also trigger the onset of new ones [5][8]. This is because Vitamin D allows the body to ramp up it’s product on T cells. T cells make your immune system smarter; teaching it not to attack itself. Vitamin D also helps reduce inflammation in the body, which in turn reduces insulin resistance. There are whole slew of other benefits of vitamin D, but for times sake, let’s save that for another post.

Similar to Vitamin A, Vitamin D is not easily obtained through a vegan diet. Supplementation is almost always needed. This is because Vitamin D2 is the only form of D that you can obtain from plants and it is very poorly absorbed in the body [4].

Vitamin D3 is the most easily absorbed. That’s because this is the form your body creates when exposed to the sun. Aside from the sun, D3 can be obtained through a variety of animal sources in the diet and certain fungi like mushrooms & lichen (these are considered vegan).

Caveat: Not all sun light is equal.

Getting sun is the most optimal way to get Vitamin D. A study in Miami, FL showed that for a person with medium-light skin, just 30 minutes of sun provides the body with 5,000 IUs of Vitamin D [7]! But getting vitamin D from the sun isn’t as easy as it sounds….

Depending on where you live, you might be able to get optimal levels of vitamin D all year long from the sun. Those of us who who live north of the 37th parallel (anywhere north of Los Angeles) typically can’t get vitamin D from November to March. Even sitting outside on a sunny day in February will provide no vitamin D because the angle of the sun is too low for the vitamin D rays to reach you.

During these “off” months your body will use its reserves it got from the summer. Once those are drained your diet & supplements will be the only source of Vitamin D. Which is why in addition to eating animal sources of Vitamin D regularly I also supplement in the winter months with liquid vitamin D3 from animal sources (not the vegan kind).

Vegans will likely need to supplement with far more Vitamin D than a meat eater, because again, their diet restricts almost every food source of vitamin D3.

Soy is a debatable food in the health & wellness world.

Some believe it’s healthy for hormones and a great vegan protein. Others believe it’s hormone disrupting, an autoimmune trigger, and can cause a lot of gut disturbances (due to the fact that it’s GMO and is typically sprayed with large amounts of pesticides). [6]

According to the USDA, 94% of soy grown in the United States is genetically modified. Most of this soy is used in animal feed which is a huge problem not only for the animal, but also for anyone who eats that animal.

Soy can also cross-react with gluten. Meaning if you have celiac (autoimmune disease) or a gluten sensitivity, your body may see soy as an allergen because of how similar they are on a molecular level. This is likely to then trigger an inflammatory response.

I personally am part of the camp that believes soy is a problem for most people. If you want to dive more into soy I highly recommend THIS article

Vitamin K2 is the train that transports calcium into your bones. You can ingest all the calcium you want, but without vitamin K2 the calcium will just sit in your bloodstream. Which is why calcium supplementation without k2 leads to plaque formation in the arteries [10]. Not only is that not good news, but if you have type 1 diabetes, a lack of calcium can lead to a handful of other problems.

To begin with, type one diabetes does a number on your bones. The swings of high to low blood sugar, autoimmune inflammation, and low levels of Insulin growth factor-1 (IGF-1) reduce bone mineralization, quality, and strength. [9]. Couple this with inadequate K2 and our bones might at well turn into fairy dust. Which is why having a diet high in calcium and K2 is especially important for people with T1D.

Vitamin K2 is almost impossible to get from a vegan diet since there’s only ONE plant source that contains it…nattō . Nattō are soybeans that have been fermented specifically with bacillus subtilis var natto. I love me some fermented foods, but Nattō has a reputation of being pretty hard to stomach. Which leaves animal sources. Animal sources are the ideal source of Vitamin K2. They’re the highest in egg yolks from pasture raised chickens, liver, milk & cheese from grass fed animals, chicken, and beef.

Just like Vitamin A, D, and K2, the most bioavailable forms of B12 and iron can only be found in animal sources (are you noticing a pattern here?). It is possible to supplement with vegan forms of both, however the body’s conversion rate of these is extremely poor. This is because vegan sources of b12 are not actually b12. They are b12-analogs which block the absorption of true B12. Similarly, vegan sources of iron reduce iron absorption by 85%. [11]

In Chris Kresser article, Why You Should Think Twice About Removing Animal Products From Your Diet, he points out:

B12 deficiencies are also extremely prevalent in the type 1 diabetic community [12]. Couple that with a vegan diet and you’re being hit with a double whammy.

Triple whammy… Metformin has been shown to induce b12 deficiency in studies [12].

B12 is an essential micronutrient and fundamental to DNA synthesis. It is responsible for everything from eye health, to cardiovascular health, to gut health, to memory function, and nervous system function.

Anemia (iron deficiency) is also prevalent in the type 1 diabetes community. Affecting 1 in 7 people with T1D. That’s about 14%, which compared to the non-diabetic community (which is 2%) is significant [13].

Is a vegan diet healthy for people with T1D? It’s obvious that a vegan diet has many nutritional weak spots, especially for someone with type 1 diabetes. As for stories about T1D’s who see an improvement in their health after going vegan… I’m still a bit skeptical. Typically when someone goes vegan they also clean up their entire diet (not just removing meat, but they’re now buying local, organic, adding less packaged foods, etc) AND lifestyle – which would improve anyone’s health. So what is really contributing to those improved health effects?

Have you tried a vegan or vegetarian diet? For how long and what did you like/not like? Are you still on it? If not, what happened to make you change?

Would you ever try veganism? Do you think a vegan diet is healthy for people with T1D?

Let me know in the comments below.

I know this can be a very triggering topic. Please keep comments respectful. This is a place of learning and sharing, not hate.

Article: Is a Vegan Diet Healthy for people with T1D?