Novolog vs Humalog: Which Is Better? 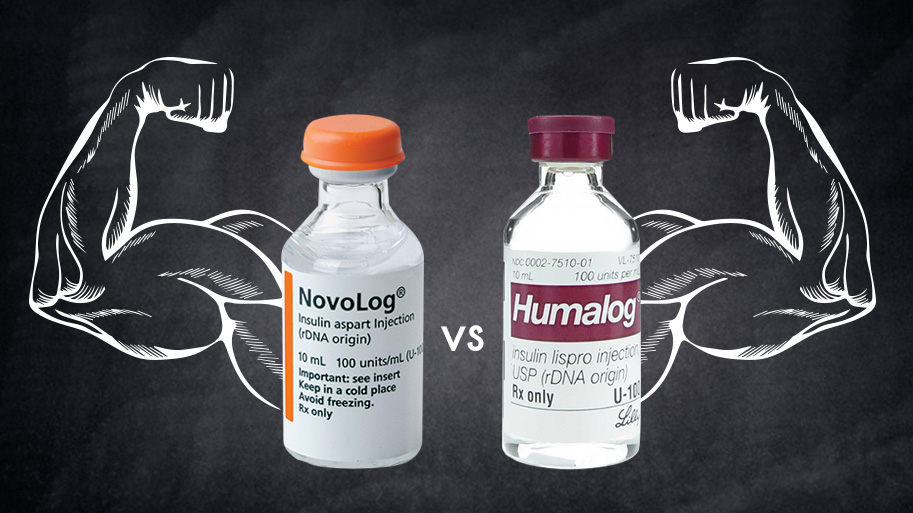 Ahhh yes, the million dollar question. In the land of type 1 diabetes and rapid acting insulin, everyone wants to know, which works better…Novolog vs Humalog?

Thank You Insurance Companies (not!)

You’re probably here because your insurance company has pulled the plug on your beloved insulin and is making you switch to the dark side. Whether they signed a deal with Lilly (Humalog) or Novo Nordisk (Novolog) you’re left in sheer panic because WTH insurance companies?! This is my life juice you’re messing with here.

Well, if you know anything about pepsi or coke then you know… while it’s true that some can’t taste the difference, others most definitely can. Same is true with Novolog vs Humalog.

Show me the differences! Novolog vs Humalog

But first, the similarities.

Both Novolog and Humalog are human insulin analogs. This means that they are a synthetically altered form of human insulin – the kind that you find naturally occurring in the human body (as opposed to being extracted from cows and pigs – like it was back in the 20’s).

Both should begin working in about 15 minutes after injection, should peak in about 1 hour, and should continue to work for 2-4 hours.

What’s with all the shoulds? Everyone reacts to medications differently; insulin is no exception.

…which brings me to the differences 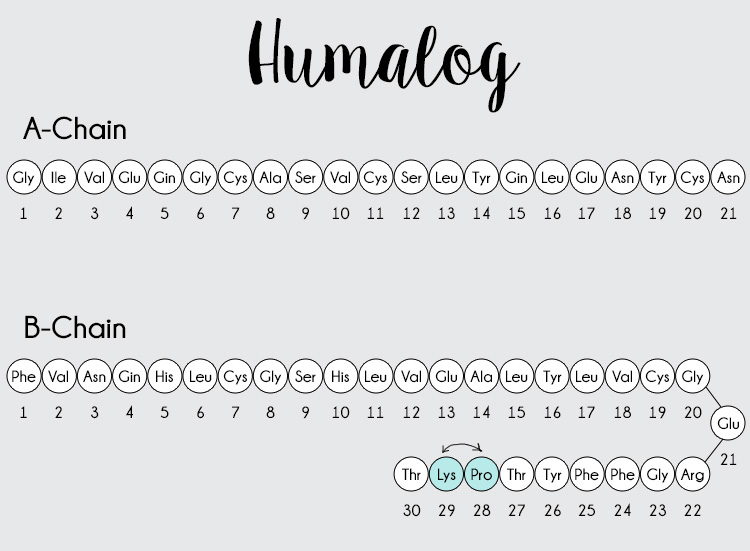 In Novolog (insulin aspart) there is only one substitution. In position 28 of the B-Chain, proline has been completely removed and replaced with the amino acid – aspartic acid. 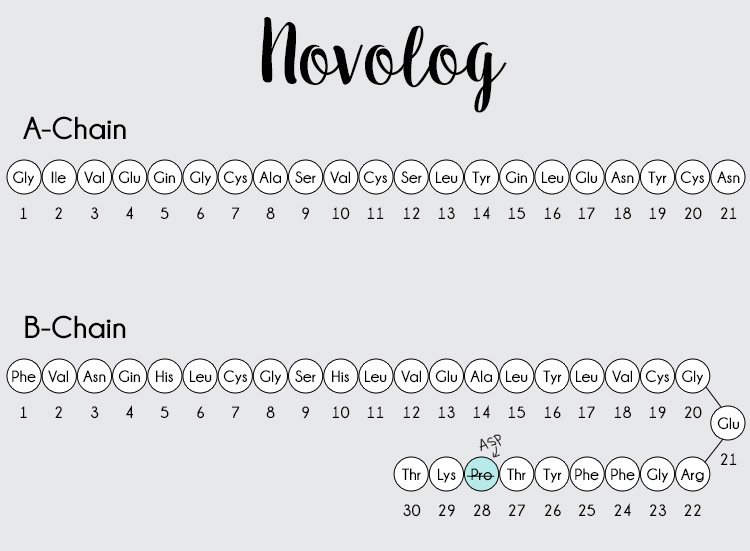 This small swap of amino acids can mean the difference of your body responding extremely well to the insulin or not so much.

How Your Body Will Respond?

Unfortunately, you won’t know until you try it.

For me personally, I have been on Novolog from the start. But when my insurance company signed a deal with Lilly I was forced to make the switch to Humalog. I tried to get my doc to write a prior auth so I could stay on Novolog, but her hands were tied because she needed to give the insurance company a legit reason for why I couldn’t make the switch. And since I wasn’t pregnant (which would have been a legit reason not to switch) and I had never tried Humalog, there was no way I could get a prior authorization – I had to at least try it.

…and as you may have guessed, it didn’t work for me.

It was as if my body hit a major wall of resistance with Humalog. It took well over 15 min to start working (probably closer to 30-45min) and it didn’t seem to ever peak. My boluses and basals weren’t working, even when I doubled my dose; I struggled to stay under 250mg/dL with Humalog.

But don’t think Humalog is the bad guy. For as many stories I’ve heard about Humalog not working, I’ve heard the same amount for Novolog not working. And for many, both work seamlessly! So you really won’t know until you’ve tried it.

So Why The Switch?

Why do insurance companies like to switch drug coverage?

But in the end, no matter what deal the insurance companies signed or what insulin they choose to cover, your doctor can write you a prior authorization to get you back on the insulin that works for you.

Earn good karma points and share with a T1D