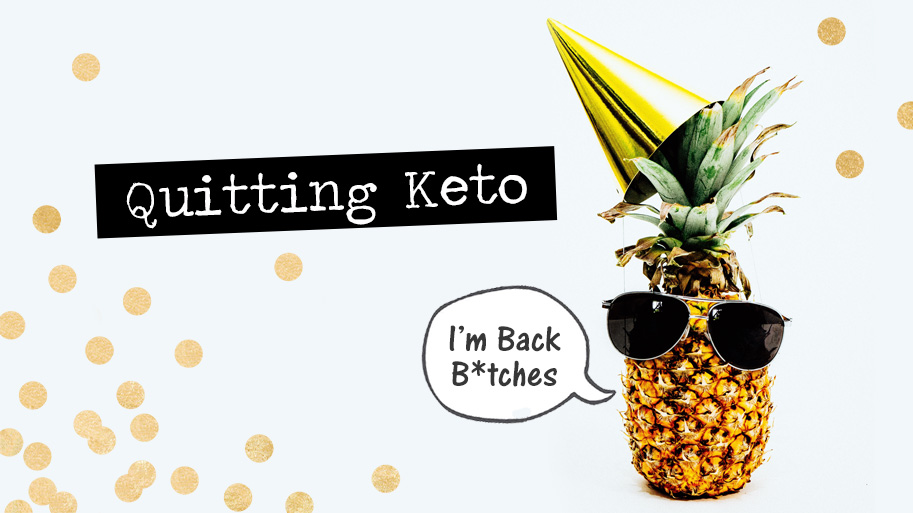 This decision was not a fast or easy one. It took a couple months and A LOT of trial and error to figure out what was going on with my sugars.

In the beginning keto seemed to be the answer to all most of my diabetic prayers. It stabilized my sugar, required less insulin, and didn’t require as many finger jabs. The first 6 months were amazing!

And then I got pregnant.

During pregnancy I increased my carb intake slightly because that’s what my body was craving.

After pregnancy I went back to keto and that’s when I started noticing a very bad trend happening.

WTF was going on? Before I knew it I would spike into the 300 zone after eating a measly 10g carbs THAT.I.BOLUSED.FOR.. I had more than doubled my insulin needs despite eating less than 20g carbs per day.

I went down the usual list of culprits (changing my pump, doing MDI injections, changed insulin vials, and I got even more aggressive with my ratios), but nothing seemed to work. I blamed it on post partum hormones, breastfeeding hormones, and the fact that I was likely experiencing a little bit of diabetes burn out. I figured it was a phase and it would pass… but after 1.5 years nothing was getting better.

I often thought, how was I able to control my sugars better during pregnancy than I am post pregnancy? When I finally got an appointment with my endo, and not just her nurse, she said something like “oh yeah, I see this with a lot of my patients on keto“.

I was speechless, but FULL of emotion. I felt pissed that my endos nurse blew my INSANE sugars off as just “that’s life honey”. I felt stupid for not looking into my symptoms sooner. And I felt deceived by what I thought was my miracle diet.

When I got home I sat my butt down on the computer and researched. I checked PubMed, Facebook, Reddit, Google, and polled you guys on IG to see what people were saying about carb sensitivity + Keto.

Turns out, it IS a thing.

The whole point of a keto diet is to have your body go into a state of ketosis – which is when you burn your own fat (and muscle) instead of sugar for fuel. In the beginning this diet will make you feel more alert, it will drop your insulin needs, and you will lose fat. Which all sounds great, right? The problem is that Ketosis is a state that your body goes into during times of famine. This is an incredibly stressful state for the body to be in. Especially long term.

That clear minded/alert feeling is because your body is pumping out adrenaline as a stress response. It’s not sustainable and will result in burned out adrenals causing you to feel less alert and foggy minded among other things.

The rapid fat loss is because your body has no other fuel sources. It has to break down it’s own fat and eventually muscle tissue in order to stay alive. But because rapid fat loss sends the signal to your body that food is scarce, overtime it slows down your metabolism & thyroid, which leads to insulin resistance[3].

The initial insulin sensitivity is due to the obvious, less carb intake, but also because less body fat increases your insulin sensitivity. However, once you’ve burned out your adrenals, slowed down your metabolism and thyroid, that’s when the insulin resistance kicks in.

How to Fix Carb Sensitivity

The body is truly an amazing healer. In terms of healing your metabolism after keto, the protocol is simple. Eat more carbs and eat often. Focusing on foods that are nutrient dense and healing to the gut.

During this healing phase you’re going to have to give a lot more insulin than you’re used to because of how resistant the keto body is to carbs. So my advise would be to slowly increase your carbs.

What worked for me was running a temp basal increase of 50% all day long (which is think is 150% if you’re on medtronic?).

Slowly but surely my carb sensitivity was going away.

Have you Experienced Carb Sensitivity on Keto?

I would love to know! Let me know in the comments below. And remember friends, be friendly 🙂 I know this can be a charged topic.

Earn good karma points. Share this with a T1D